At the present moment, I believe that Rebecca has something seriously wrong with her, apart from the fact she can’t take care of Seb or remember much, these spells where she feels faint concerns me. I know of baby brain and such, I have been around babies and new moms for years but this isn’t that, there is no way baby brain explains what is going on, who is Bex trying to kid? I am no expert in head injuries but Bex should be in some sort of therapy and counseling to help her recover, she won’t get better without professional help. My heart goes out to Bex during this difficult time, Emily is doing a wonderful job at her portrayal. I know that isn’t a popular opinion but I like Emily as an actress, she plays Bex well, so much so I dislike the character immensely.

Joe Tate in is infinite smug nature thinks that he is untouchable (Robert circa 2014-15) and will stop at nothing to prove how important he is. I think the more I listen to his excuses of morality the more I dislike him, he is a shining example of someone who lets their past fester to the point where they are taken over by rage. Laurel got hurt tonight, in part, because of Joe nagging Jimmy and he couldn’t care less. This also makes me wonder about Joe’s intentions with Noah, does he really want to get to know his little brother or are there ulterior motives? Noah has had a rough life, even at his young age, he doesn’t need one more person to come into his life just to leave.

Graham is increasingly interesting to me, I want to explore more of his past and see what really motivates him. It is clear he doesn’t support Joe’s motives, especially in his remarks about Laurel being a nobody. I hope Graham is the kind of character that foreshadows the future of Joe being brought down. Afterall, Robert’s intentions now are to take care of his family and be a better man; Joe, on the other hand, is concerned with his vendettas and on getting even. A person’s intentions are significant in soap stories, my money is on Robert winning. I also feel like Graham may let slip to Robert what is going on, one way or another Robert is going to find out what Joe is planning. There are so many things being set up to happen that the anticipation is getting real, goodness knows when it is all going to kick off, I am excited!

Jimmy, once again I ask “what are you doing”, seriously what is up with the blind following? I am glad Nicola didn’t try to jump Jimmy today, it was getting a bit obsessive. Nicola clearly enjoys Jimmy being “given his due”, she is completely blinded by this false concept that Joe is really taking care of them, she couldn’t be further from the truth. I wouldn’t want to be Jimmy or anyone close to his when the shoe falls, which is really sad. I like Jimmy, always have, he is one of those loveable characters who brings both serious and comedic relief to a drama show. The only thing we can do now is to wait and watch because this is going to get worse before it gets better.

I think Priya massively misinterpreted Pete’s intentions when he asked if she wanted to get a drink later, as seen by her rather rapid exit in the wake of Rhona’s appearance. I didn’t notice before how much Priya has become a ticking time bomb in the months since she and Pete had an affair. Any time a child is put into a situation where a parent/guardian lashes out at them I immediately get tense. I come from an abusive home, where my mom used to hit us and verbally abuse us, it is something that affects a person for the rest of their lives. I get she had a difficult day with “The Shining” twins and children unwilling to eat but it doesn’t excuse lashing out and throwing things. I know she feels remorse for what she did but I don’t want Priya to turn into an abusive person, let’s hope this is just a means for her to realize she needs some kind of help.

I don’t have much to say about Chas and Paddy scenes tonight, I am still gauging how I feel about the situation they seem to have found themselves. Paddy is wonderful with children, no doubt in part due to his childlike nature and quick wit. I think he would make an excellent father to Chas’ baby but so far that is not an option. Chas exploding at Paddy about the decision she made to have an abortion I think was more or less directed at herself. Can she face her decisions years after and still be fine with what she decided? Once again, Paddy comes along in complete support of Chas by telling her that he feels it is best that she has the abortion and he can live with that decision. The look on Chas’ face during their hug gave me an odd feeling of maybe Chas wants to keep it now or is in doubt of her own feelings about wanting to have an abortion. Whatever happens though, I think she should tell Aaron so he is aware that she needs support, he will be there for her, which is what she needs. 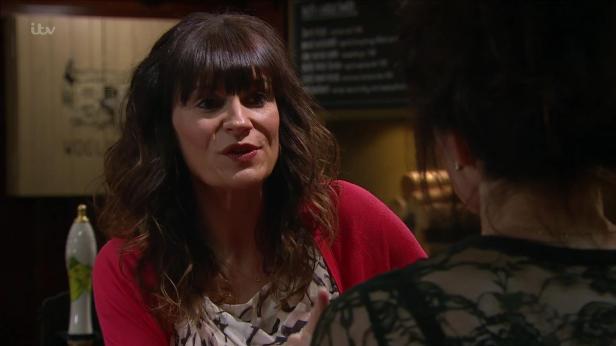 In other news Brenda knows that is Laurel who Bob cheated on her with, my heart goes out to her, she doesn’t deserve to be hurt like this. I think I have said it so many times now that people know how much I dislike this storyline, I hope it ends soon or takes some kind of turn.

It is good to know that Zak came clean about Ashley’s window, I hope the Thomas’ are understanding, as it was only an accident.

Happy Birthday to Noah and Jimmy!

Here is a link to an old article I wrote about Prison Homophobia.