I am feeling a Ross and Rebecca relationship, a real one this time, given their similar situations they could help each other cope. I could be wrong in how well they could help one another but both have been feeling lost and rather undesirable, they could use the company. I even cheered Bex on yesterday at her confronting the group of girls having fun at Ross’ expense. Difficult for me to watch the scenes of him taking pain pills and drinking liquor, as I remember being there myself several years ago.

Pete’s support has been wonderful, as has Rhona’s, they have been literally the difference between Ross living and dying. At this point I think Ross’ pain is more psychological than it is physical, he has worked himself into this self-deprecating state that he will do anything to avoid feeling. Heaven knows I did the same thing. Seeing him continue to take pills even in the hospital doesn’t bode well for his healing. At least Ross is in the hospital and being watched closely. I really want Ross to come out of this being stronger, wiser, and happier than ever.

Brenda is doing a poor job of covering up her disdain for all things Laurel, it is evident she isn’t going to be able to handle much more. Unfortunately, her sights are set on Laurel to take revenge on, it should be Bob, he is as guilty as anyone. It is a wonder to me that no one has actually caught on to the remarks she has made and her general lack of happiness.  I can’t wait till the shit hits the fan, I am growing very bored with this entire storyline. I wish I had more to say about it, maybe if something more interesting happens I will but for now, I am ready for this storyline to be over. 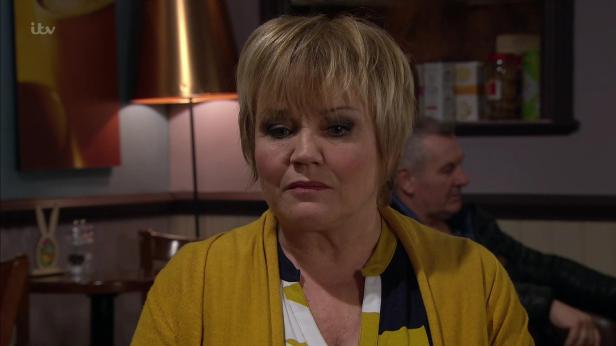 Jimmy Jimmy Jimmy, what on earth are you doing? It can’t be this easy to manipulate a person, Joe certainly hasn’t shown us any real clues that he is going to become a decent person anytime soon. Knowing Joe’s luck Robert is already aware of everything Joe is trying to do and is intentionally making it look like the company is about to go belly up. Let’s face it Robert is way too smart to let this get over him that easily, I can’t wait until tomorrow to see what happens!

I didn’t expect the meeting with Mr. Henderson, the vet inspector, to go quite like it did. I enjoyed the bit of laughter they had but per usual Paddy sticks his foot in it. I am enjoying Charity and Vanessa more and more, although I would like Aaron and Robert to have as many kisses as they get but given Charity’s very open nature it doesn’t surprise that their kiss ratio is higher. No fighting now or advocating for Robron to get more screen time, my comment is merely in passing and shouldn’t be taken too seriously. Given how today went, who knows what is going to happen with Vanessa tomorrow, we can only hope she gets off easily, she really isn’t to blame in this situation.

I continue to enjoy Tracy’s storyline, it has given us all a look into Amy’s wonderful acting skills! Jacob has become a very morally ridden teenager, I like that he has supported Tracy during this whole ordeal. I hope that we can continue to see their bond grow, he really looks up to her, which is rare in teens today. David, no doubt, has been one of the most selfish people of late, especially his hypocrisy in this storyline. However, I don’t think it undoes some of the better qualities David possesses, maybe one day he will get his head completely out of his butt and fix this.

I wonder if there will be any way to fix David and Tracy’s relationship, it is evident that Tracy still loves him. There are no excuses for what David did but I liked them together, one of my village faves.

I am sorry the reviews are so sporadic, consequences of living with chronic pain, I appreciate the patience.